Posts from the ‘51’ Category 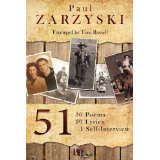 For the poet, a review is feedback, and for potential readers and book sales, a review can offer the flavor of a work with hopefully some unique insight. Tom Russell’s Foreword to this collection concludes, “Read this book. A little of the passion might rub off on all of us, and edge us towards the poetic redemption we need and crave.”

I couldn’t agree more, but if the world needs and craves ‘poetic redemption’ so much, why in the hell hasn’t someone seriously reviewed “51”? It ought to get the 2012 Wrangler Award (National Cowboy and Western Heritage Museum) from my narrow and prejudiced perspective, not because Paul is my dear friend, but because no one else comes close to the originality of these poems and songs, no one living west of the Mississippi has encompassed more compassion and consideration as his Self-Interview.

For a flavor of the poems and lyrics (songs), as well as a taste of this passion, see the four pieces published here in DCR that are included in this collection, like “Bob Dylan’s Bronc Song,” the 2010 Spur Award winning poem from the Western Writers of America. My current favorite of them all, however, is “Red Light” written In Memory of Carole DeMarinis.

Revved-up on lust in the crosswalk
two fledgling teens, holding hands,
flaunt, preen, promenade, strut
their youth with cockle-doodle-doo pomp
just one vintage Chevrolet hood’s length away
from me—in my fifties, of the sixties—caught
somewhere between sock hops and Woodstock,
between Viet Nam and Iraq
in this stoplight time warp, radio
tuned to the oldies station—shaboom-
shaboom to “Tombstone Blues”
to let it be, let it be, so loud
these lovebirds, joined at the thigh,
glance my way. Never before have they
been lit into flames by such
a large scarlet car, vermillion paint
framed in polished chrome, front bumper
distorting their onemess of love
like a funhouse mirror.
I strain
my hippest black-cowboy-hatted-
in-lieu-of-full-head-of-hair-
over salt’n’-pepper mustached
grin, flex my sinew, my buff
forearm out the window like a buzzard’s wing,
drape my right bicep
oh-so-bitchin’ and groovy
man…I mean “dude”…
over the seatback. All this pose
lacks is a pack of Luckys,
a lariat loop slow motion smoke ring
floating into some noir
plot, the moody James Dean, young
Brando or Newman sitting in for me
as a body double.
The couple, in unison,
smiles—teeth brighter than simonized chrome
over a pair of four-barreled-carb hearts,
skin, tighter, smoother, more gloss
than any new paint job, washed and chamoised,
chatoyant in the noon sun. The girl
lip-syncs two syllables, unfurling, bending
them into a sensual red symphony—“sweeeet
riiiii-ddde”—with a slight kiss-
tossing lift of her chin that teases
her onyx-black hair
away from the exact spot
upon her cheek where I fantasize
placing a platonic peck
of pure gratitude.
Long after
the light turns green, I sit idling
in neutral—beyond lust, beyond
life’s rearview noise—yearning only
to soak in this innocence,
meld it with my own
long ago and yesterday, both
always and never in a simpler time,
a more perfect world, any world
less tormented by war. What I want
desperately to remember of this hopeful
episode is the metaphorical deep pink
double-fisted-his-and-her
fingers clutched together, raised
toward me in revolutionary salute, prayer,
praise and mourning to youth, crimson-needled
arc of darling years
puched 0-to-60 in the lurid
blue of far, far, far too few seconds.

In the running with “Red Light,” an excerpt from “What of the Ugly?”

The ugly go out of their way
to say the Lord’s name in vain
while praying for parity in heaven or,
better yet, getting even
in hell. The ugly know
things will get much uglier, but we refuse to
fear death.

and a slice of “Good Friday”, lamenting the loss of his father:

Prayerless
with faith, I will launch
my lucky bait into the mystery
riddled with apparitions. I will keep vigil,
lean with the weight of all my heart
into the fogged mirror, my hands splayed,
fingers flattened against the glass,
against the murky depths. Mesmerized,
I will yearn until I fiercely see again
someone here I can love to believe in.

I know nothing of
sequels, encores, postscripts,
altered states in the wake
of our last systolic starburst of blood
into the arteries. The visceral
aftermath of sadness, nevertheless,
becomes more my bailiwick
with age.

Of the 20 Lyrics, the collaborative impact of writing songs plays out interestingly on the page as style, as tune and meter, and as musicians change. And one might argue that songs tend to be lighter, often more predictable, than poems, especially without music. Working within these varied structures drawn from more than a decade of songwriting, Zarzyski offers another dimension, another caliber in his arsenal, as a writer that not only enhances this powerfully diverse collection of poetry, but brings his poetic perspective home from another angle. Written solo, “No Forbidden Flowers” (included in DCR), a lovely tribute to our fading generation, remains high on my list as both poem and song.

But the very real pièce de résistance is Zarzyski’s Self-Interview, five enlightening rounds of sparring with himself about living and writing with passion, about the stage and the page, about religion, and all with such consideration balancing the sensitive with the sensible, it is a candid and risky glimpse into what makes this accomplished poet tick.

Yeah, I think the ‘Self-Interview’ is important, as do you, or you wouldn’t have done it – more than a therapeutic rant, more than a self-indulgent memoir, you wield both meat cleaver and scalpel to bare the bones to a creative process without a gram of academic snoot, making it accessible to all on Planet Earth, to the gods and muses, but especially the hands-on, blue collar crowd – and that’s important! How many postured @#$%^&s are there on the cowboy stages, and elsewhere, that need the green light to reach inside and be themselves, to be OK with being human?

And isn’t that the poet’s job? As TR said, “Read this book.”